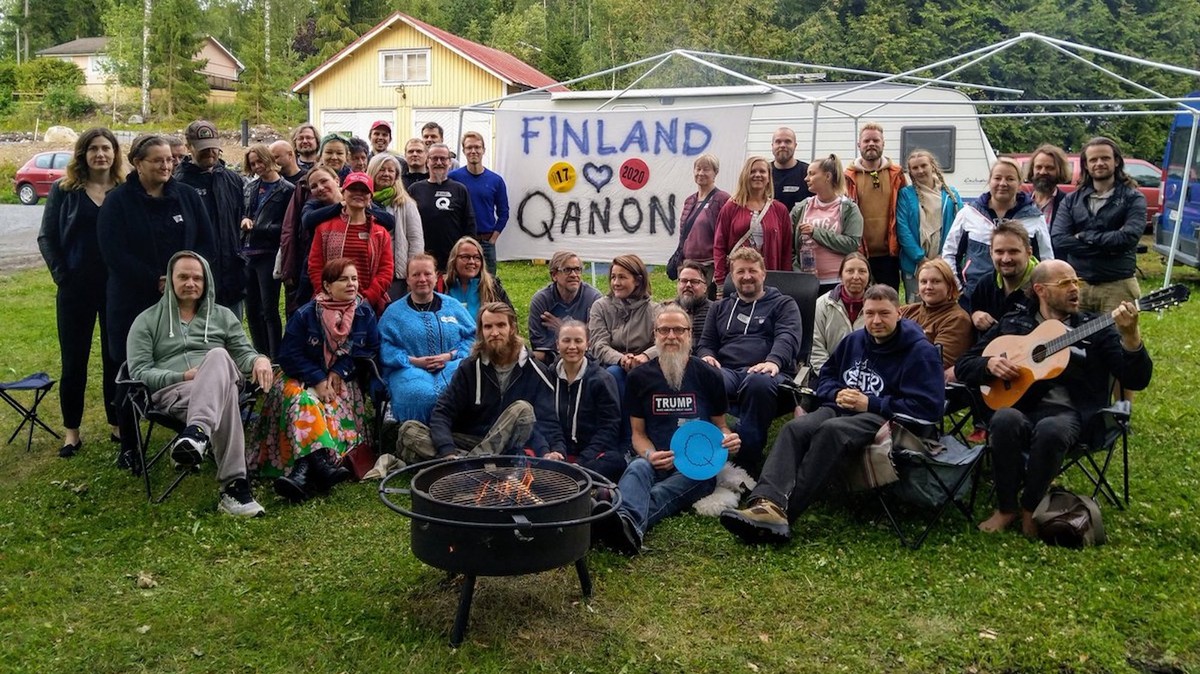 It’s July 11 and around 50 people are meeting at a hotel in Dragsfjärd, a small community two hours east of Helsinki, for a weekend QAnon festival. While walking through the crowd, Ekman stops to speak to a man wearing a nametag made of duct tape with Bono written on it.

“What a beautiful hat,” Ekman says. “As you see there are a lot of Trump fans here, of course, as it is a Q meeting.”

Shortly after Jarmo Ekman starts livestreaming his get together an older woman walks into view wearing something you wouldn't expect to see at a small Finnish hotel: a MAGA hat. She blows a kiss to the camera and shows off her hat like a model.

“Most of (the new groups and pages) appear to be international,” said Argentino. “There aren't a lot of new U.S. groups; the big groups have just grown more. It's places like Austria, Denmark, Hungary, Poland, the Czech Republic, Russia, and Israel.

On Facebook, his data showed there were 179 groups with more than 1.4 million members—up from 60 groups and less than a quarter a million members in the same period. During that time, QAnon pages on Facebook doubled, from 63 to 120 pages. Facebook removed a small number of QAnon pages in April but the conspiracy is still growing quickly on the platform.

Marc-André Argentino , a PhD candidate at Concordia University who studies QAnon and similar far-right movements, recently did a data sweep of QAnon groups on social media. Based on his most recent analysis (which was taken before the Twitter crackdown last week), QAnon has had a 71 percent increase in Twitter content and a 651 percent increase on Facebook since March.

It’s a conspiracy that’s been able to reach new heights during the pandemic as people around the world desperately search for community and any way to make sense of the chaos. The QAnon community is welcoming to anyone as long as they believe in at least one of the many tendrils that branch out from the theory’s heart—that the world is extremely screwed because of bogeymen behind the scenes, and only those smart enough to see through the veil can fight them. While the actual details of the conspiracy are hyper-focused on the U.S., the broad strokes can be applied to almost anywhere, which helps to explain the rapid growth of QAnon across borders.

“Armies” like this can be found in Germany, France, and the U.K., as well as in Canada, Japan, and Iran. All of them support QAnon, a vast conspiracy theory that Donald Trump is waging a war against the “Deep State” made up of elite families, politicians, and celebrities, which also just happens to connected a massive child sex trafficking ring and is currently using COVID-19 to entrench its power.

“This is the first Q weekend festival ever in this world,” says Bono. On his shirt are the words “QAnon Army Finland.”

“Germany recently had protesters asking for Trump to come and liberate them from the German deep state. That's fucked up,“ he said.

Even Ekman’s Q meeting in Finland has grown. Ten months ago, he held another Q gathering in Helsinki where he was only able to get 19 people out.

Q and the ever-changing conspiracy

The conspiracy started on 4chan, one of the more notorious imageboards, in 2017 and has grown mightily from there. The conspiracy has gained notoriety for not only its numbers but also for its elaborate and outlandish theories, including “mole children” being sex trafficked underground, and celebrities such as Canadian Prime Minister Justin Trudeau and actor Tom Hanks having been secretly executed and replaced with body doubles.

The movement is fluid and adaptable, so what's popular among the group today may very well be different months down the line. In the United States, 68 believers are running for Congress, some who even have a shot at winning. After coming in first in the primary, prospective Georgia GOP candidate Marjorie Taylor Greene, a vocal QAnon supporter, is headed into a run-off vote. According to the Atlanta Journal-Constitution, Greene even offered to help her followers get acquainted with the confusing world of QAnon. The group and its unwavering beliefs have been described as cult-like by some experts, projecting Trump and Q as quasi-religious figures.

In Canada, QAnon recently gained the attention of the mainstream press after it was found that a heavily armed man who stormed the gates of Trudeau’s home had posted a QAnon meme. (He has been charged with uttering threats to kill or injure the prime minister; his motives have not yet been determined.)

Blain McElra runs the QAnon Canada page on Facebook as well as a few other Canadian-centric QAnon pages. McElra told VICE he went from 400 members to 2,800 members since the start of the pandemic.