Home Article The Rise & Fall of Silver Apples: The 1960s Electronic Band That Built Their Own Synthesizer, Produced Two Pioneering Albums, and Then Faded into Obscurity
Technology

The Rise & Fall of Silver Apples: The 1960s Electronic Band That Built Their Own Synthesizer, Produced Two Pioneering Albums, and Then Faded into Obscurity 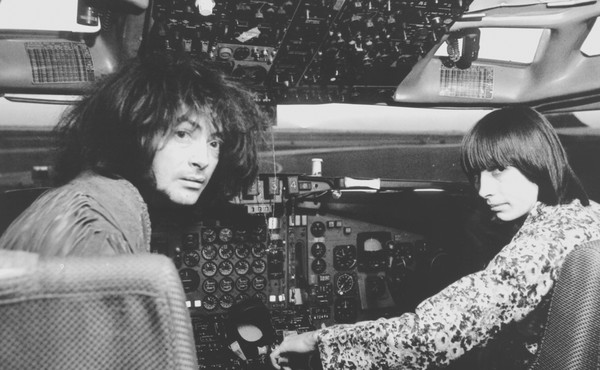 In the late 70s and early 80s, a handful of musical duos emerged who would have tremendous impact on post-punk, alternative, new wave, and experimental electronic music. Bands like Suicide, NEU!, and the Pet Shop Boys made far bigger sounds than their size would suggest. Before them all came Silver Apples, a duo who should rightly get credit as pioneers of electronic experimentation in pop song form. Like many a pioneer, Silver Apples had no idea what they were doing. They also suffered from a string of some of the worst luck a band could have, disappearing after their second album in 1969 until a mid-90s rediscovery and brief return.

Bandmembers Simeon Coxe and Danny Taylor formed the band in 1967 from the ruins of a rock group called The Overland Stage Electric Band, which fell apart when Coxe began experimenting with old oscillators onstage. All of the members quit except Taylor, and Coxe set about building his own synthesizer, “a machine nicknamed ‘the Simeon,’” Daniel Dylan Wray writes at The Guardian, “which grew to consist of nine audio oscillators with 86 manual controls—including telegraph keys—to control lead, rhythm and bass pulses with the user’s hands, feet and elbows.”

Coxe was the only person who could play the Simeon, and he sang as he did so, his weird, warbly voice complementing his machine, as Taylor played proto-Krautrock beats behind him. “I had heard the word synthesizer,” he says, “but I had no idea what it was. We were dirt poor and used what we had, which was often discarded world war two gear.” They were essentially making up electronic pop music as they went along, isolated from parallel developments happening at the same time. They named the project after a line by William Butler Yeats (many of their lyrics were written by poet Stanley Warren). Around the same time, composer Morton Subotnick released his groundbreaking all-electronic album, titled—after Yeats—Silver Apples of the Moon.

It was Silver Apples' fate to be overshadowed by other releases that came out immediately after their 1968 self-titled debut, such as Wendy Carlos’ Switched on Bach and Gershon Kingsley’s hit “Popcorn,” both of which popularized Robert Moog’s modular synthesizers. Moog himself became so fascinated with Coxe’s singular creation that he visited the Silver Apples studio to see it for himself. The band’s manager scored them their very first gig playing for 30,000 people in Central Park, “providing a live soundtrack to the Apollo moon landing—broadcast on enormous screens beside them,” writes Cian Traynor at Huck magazine, “as people took their clothes off in the rain.”

This magical experience—and other brushes with fame, such as a one-off recording session with Jimi Hendrix—was no indication of the band’s bright future. For their second album, they were allowed to photograph themselves inside the cockpit of a Pan Am jet. The inclusion of drug paraphernalia in the photo, and of a crashed airplane on the back, prompted a lawsuit from the airline. The album was pulled from the shelves, the band shut out of the industry, and a third album, The Garden, remained unreleased until 1998.

For a look at how musically forward-thinking Silver Apples were, see the short documentary about their rise and fall above. They ended up influencing neo-psychedelic electronic bands like Stereolab and 90s duo Portishead, whose Geoff Barrow says, “for people like us, they are the perfect band…. They should definitely be up there with the pioneers of electronic music.” Taylor sadly died in 2005, just after Coxe had partially recovered from a broken neck suffered the year of their 90s resurgence. But Silver Apples music is immortal, and immortally otherworldly and strange, even if its creators never quite understood why. “To me and Danny,” says Coxe, “it sounded perfectly normal and was a normal progression into the areas we were trying to go.”

As so much experimental electronic pop music that emerged around the same time proves, Coxe was more right than he knew. What Silver Apples did turned out to be a “normal” musical development, though they had no idea that it was happening when they made their astonishingly groovy, spaced-out records.

Josh Jones is a writer and musician based in Durham, NC. Follow him at @jdmagness